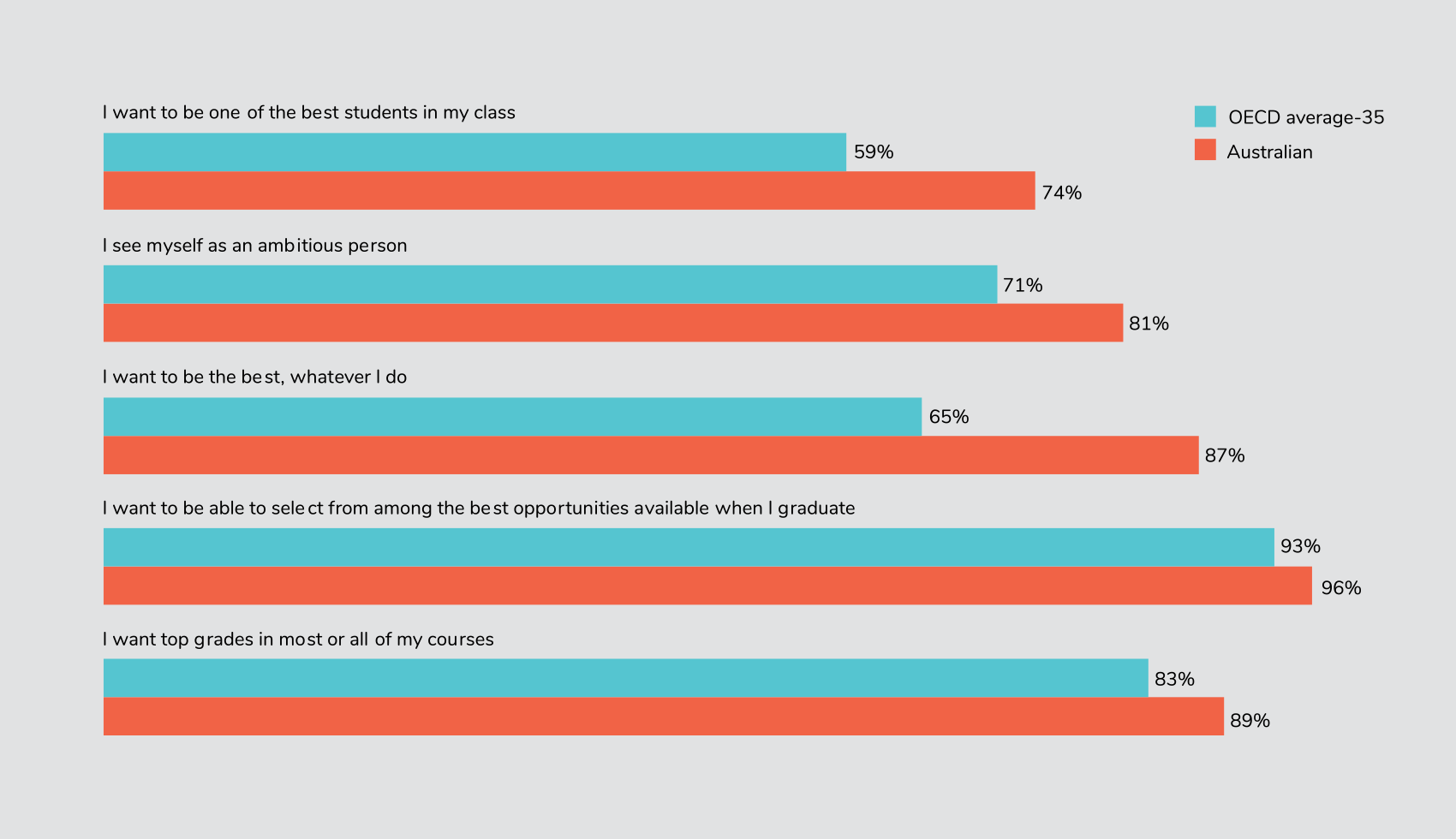 I was at a Learning Creates Australia workshop event a few weeks ago where the following chart was shared. I suddenly realised why so many young Australians are disengaging from education and their future.  Australian competitiveness means Australian teens are set up to fail.

The graph clearly shows that young teenage Australians have exceptionally high aspirations for achievement in their studies.  74% want to be ‘one of the best in my class’ compared to 59% in the OECD generally.  But the reality is that 74% cannot be one of the best the class.  Maybe 5-10% can.  So as the other 65% realise they are failing to meet this aspiration. They experience a sense of failure.  They shift from the 81% seeing themselves ‘as an ambitious person’ and realise they that ambition in school is misplaced.  And the 87% who ‘want to be the best, whatever they do’ realise there are going to be people better than them. And so many give up with school.

So how did Australia become so incredibly over-ambitious?  Being the best is incredibly competitive and more than 20% more Australian teens are saying this than on average in other OECD countries.

Comparing Australia and the UK Experience

When I moved to Australia from the UK, I expected it to be culturally similar.  I was in for a shock.  I worked in Academia and could not believe how competitive the sector is here between individual academics in Universities, never mind between Universities.  The lack of collegiality, clique forming and unwillingness to ‘share’ useful insights, knowledge and skills among many was dumbfounding. I found they’d rather protect themselves on a small pedestal than contribute to the collective whole being better.

While not everyone and every department is like this, from my experience it was the norm rather than the exception, and I experienced it in 3 different institutions. For example, at none did I manage to instigate peer-review of teaching as a departmental practice. Everyone saw this as threatening rather than a great development opportunity – so nobody every got feedback on their teaching performance other than the student evaluation forms (on which there is a whole body of literature in itself).

Shift to the school sector and is similar, propped up massively by the ATAR, ranking and measures of school success.  Each State is fully in control of their school education – they fund the regulators, the exam board and the schools.  Schools then compete against each other on different measures, and the message of academic achievement and ATAR is strong – both from teachers and parents – despite the fact that on an individual level most people hate it and want it to go; collectively it dominates.

What are Young People saying?

I listened to the young people at the Learning Creates Australia event I was at, and heard stories of them being ill-informed about their future choices as school agendas dominated over student agendas. I heard of them succeeding by finding their own learning survival strategies to overcome the pressure from schools. And I heard them seeking to find ways of validating themselves outside of academic success.

The current school system privileges the highly competitive kids who have learnt to play the current school assessment game well.  Hence there is talk about development of learner profiles including skills and capability measurements.  The danger is that they will simply change the game that people are playing in how to score highly.

We need to develop, recognise and reward something other than competition if we really want to change assessment.  And this is not giving a medal to the loser – that is still a competitive mindset.  This is about having a profile developed which prevents people from being the ‘winner’ at everything.  For example, X achieves their best work working on their own, or X achieves their best work working with others. X can’t be both.  That doesn’t mean X can’t be a good team player and good at working on their own, but it forces a choice that shifts away from being ‘the best’.

It would be great if the PISA questions included less competitive statements. For example, ‘I want to be the best that I can be’ rather than ‘I want to be better than others’.  Allowing success to be defined in their own terms is key to teens being able to achieve it. We need to let them define the scope of who they want to compare themselves to as part of that achievement, and on what basis.

But can you standardise this and scale it to allow Universities to discriminate on entry (which is what an admissions process is)?  Absolutely!  It just takes the willingness to do so.  And this means parents, schools, and government departments have to stop ranking against limited criteria and start to make comparisons on the basis of relative strengths where nobody can be the ‘best’ at all.